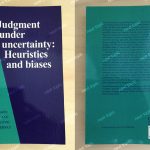 Part VI: Overconfidence
20 Overconfidence in case-study judgments
Stuart Oskamp
21 A progress report on the training of probability assessors
Marc Alpert and Howard Raiffa
22 Calibration of probabilities: The state of the art to 1980
Sarah Lichtenstein, Baruch Fischhoff, and Lawrence D. Phillips
23 For those condemned to study the past: Heuristics and
biases in hindsight
Baruch Fischhoff

The approach to the study of judgment that this book represents had origins in three lines of research that developed in the 1950s and 1960s: the comparison of clinical and statistical prediction, initiated by Paul Meehl; the study of subjective probability in the Bayesian paradigm, introduced to psychology by Ward Edwards; and the investigation of heuristics and strategies of reasoning, for which Herbert Simon offered a program and Jerome Bruner an example. Our collection also represents the recent convergence of the study of judgment with another strand of psychological research: the study of causal attribution and lay psychological interpretation, pioneered by Fritz Heider.

Meehl’s classic book, published in 1954, summarized evidence for the conclusion that simple linear combinations of cues outdo the intuitive judgments of experts in predicting significant behavioral criteria. The lasting intellectual legacy of this work, and of the furious controversy that followed it, was probably not the demonstration that clinicians performed poorly in tasks that, as Meehl noted, they should not have undertaken. Rather, it was the demonstration of a substantial discrepancy between the objective record of people’s success in prediction tasks and the sincere beliefs of these people about the quality of their performance.

This conclusion was not restricted to clinicians or to clinical prediction: People’s impressions of how they reason, and of how well they reason, could not be taken at face value. Perhaps because students of clinical judgment often used themselves and their friends as subjects, the interpretation of errors and biases tended to be cognitive, rather than psychodynamic: Illusions, not delusions, were the model.

With the introduction of Bayesian ideas into psychological research by Edwards and his associates, psychologists were offered for the first time a fully articulated model of optimal performance under uncertainty, with which human judgments could be compared. The matching of human
of the major paradigms iv. it led to concerns ne and the methods eflected in most of ich of the early work nance and introduced otimality. In contrast, lain both correct and judgments to normative models was to become one of them of research on judgment under uncertainty.

Inevitably it , with the biases to which inductive inferences are prone and the that could be used to correct them. These concerns are reflect the selections in the present volume. However, much of the ea, used the normative model to explain human performance and in separate processes to explain departures from optimality. In research on judgmental heuristics seeks to explain both corre erroneous judgments in terms of the same psychological processes.

The emergence of the new paradigm of cognitive psychology me profound influence on judgment research. Cognitive psycholoou concerned with internal processes, mental limitations, and the way in which the processes are shaped by the limitations. Early examples as conceptual and empirical work in this vein were the study of strategiesne thinking by Bruner and his associates, and Simon’s treatment of heuristica of reasoning and of bounded rationality.

Bruner and Simon were both concerned with strategies of simplification that reduce the complexity of judgment tasks, to make them tractable for the kind of mind that people happen to have. Much of the work that we have included in this book was motivated by the same concerns.

In recent years, a large body of research has been devoted to uncovering judgmental heuristics and exploring their effects. The present volume provides a comprehensive sample of this approach. It assembles new reviews, written especially for this collection, and previously published articles on judgment and inference. Although the boundary between judgment and decision making is not always clear, we have focused here on judgment rather than on choice. The topic of decision making is important enough to be the subject of a separate volume.

The book is organized in ten parts. The first part contains an early review of heuristics and biases of intuitive judgments. Part II deals specifically with the representativeness heuristic, which is extended, in Part III, to problems of causal attribution. Part IV describes the availability heuristic and its role in social judgment. Part V covers the perception and learning of covariation and illustrates the presence of illusory correlations in the judgments of lay people and experts.

Part VI discusses the calibration of probability assessors and documents the prevalent phenomenon of overconfidence in prediction and explanation. Biases associated with multistage inference are covered in Part VII. Part VIII reviews formal and informal procedures for correcting and improving intuitive judgments. Part IX summarizes work on the effects of judgmental biases in a specific area of concern, the perception of risk. The final part includes some current thoughts on several conceptual and methodological issues t pertain to the study of heuristics and biases.
For convenience, all references are assembled in a single list at the of the book. Numbers in boldface refer to material included in the book.

identifying the chapter in which that material appears. We have used ellipses (…) to indicate where we have deleted material from previously published articles.
Our work in preparing this book was supported by Office of Naval Preorch Grant N00014-79-C-0077 to Stanford University and by Office of Naval Research Contract N0014-80-C-0150 to Decision Research.We wish to thank Peggy Roecker, Nancy Collins, Gerry Hanson, and Don MacGregor for their help in the preparation of this book.